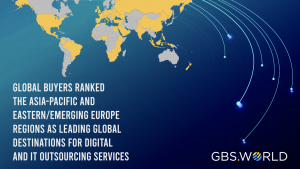 The World Source Marketplace for Global Business Services (GBS.World) has published the latest 2022 GBS World Competitiveness Index results, which identifies and ranks the leading global destinations for Digital and IT Outsourcing.

Over 380 interviews were conducted with global enterprise executives from organizations based in Australia, Europe, the United Kingdom, and the United States that outsource and offshore services.

Surveyed executives were asked to rank and rate each country that they outsource to, including service level delivery across various key business process areas.

Based on the survey results, the top countries across four global regions were ranked according to their final scores. At a regional level, the top 10 countries in each region were also placed in three categories: High Performer, Proficient and Capable.

It is no surprise that the Asia-Pacific (APAC) region emerged as the dominant destination for IT outsourcing globally across the five key Digital and IT outsourcing categories – general ITO services, software development, technical and helpdesk support, data analytics and science, and robotics and automation.

India emerged as the clear standout performer, appearing in the top 5 in every category and ranking first in two categories.

Poland drove the emergence of the Eastern/Emerging European (EE) region in the rankings, placing favorably in three categories and ranking first in the Technical and Helpdesk Support category and the top three in another two (general ITO and Data and Analytics).

The APAC countries of Philippines, Malaysia, China and South Korea also featured prominently across the categories, which helped to cement the region as the leading delivery locations across all the GBS categories assessed in the survey.

China is a leader in Robotics and Automation, while the Philippines ranked second in IT Outsourcing and the Technical and Helpdesk Support categories.

Africa had good representation, with Egypt emerging as the dominant location in this survey. The North African country ranked in the top 5 in the IT outsourcing and Software Development categories while South Africa and Tunisia appeared in the top five in a category each – Technical and Helpdesk Support and Data and Analytics, respectively.

Mexico, Brazil and Argentina were the best ranked destination in the Central and Latin America (CALA) region.

According to survey results, India remains the preferred global destination for IT outsourcing, followed by the Philippines and Poland. Despite Eastern Europe’s emergence as a prolific destination, the APAC region still dominated the rankings with six countries in the top 10.

The survey findings revealed the emergence of Emerging/Eastern Europe as a global ITO destination of choice in the software development domain. Two EE countries ranked in the top 10 – Poland and Romania.

Global buyers ranked Poland, Romania and Bulgaria as high performer countries. Despite the war in Ukraine, the country ranked in the proficient category and is noted for its resilience with many developers still delivering services from safer regions in the country. Among the proficient countries, Czechia also received a high ranking along with Hungary. Estonia ranked in the top position for capable countries in the region, with Belarus, Lithuania and Serbia taking second, third, and fourth places respectively.

African countries featured prominently alongside the established APAC and CALA destinations that traditionally dominate the Technical and Helpdesk Support category, with three in the top 10. South Africa ranked 4th, Egypt in 8th and Rwanda in 10th, which suggests that this category holds the region’s strongest IT outsourcing value proposition.

When measuring Technical and Helpdesk Support performance within Africa, South Africa, Egypt and Rwanda emerged as the region’s high performer countries. Nigeria, Tunisia and Senegal emerged as the most proficient African countries, while Morocco, Mauritius and Kenya were ranked the most capable countries.

However, it was Emerging/Eastern European countries that emerged strongest in this category, with Poland rated as the preferred global destination for Technical and Helpdesk Support service delivery. Two other EE countries joined Poland in the top 10, with Croatia ranked 7th and Romania 9th.

India was the leading country in the Data Analytics & Science service delivery category and led a strong performance by the APAC region in this category, placing ahead of South Korea in third and Malaysia in fifth.

GBS.World plans to release the results for other areas of global sourcing trends for the GBS World Competitiveness Index in 2022 and 2023.

Find certified providers with
trusted reviews to service your business.